Captain Sully Sullenberger, piloting his Airbus 320, avoided a crisis by landing his aircraft on New York City’s Hudson River after a massive flock of geese crippled the plane.  Both engines lost power but the former fighter pilot landed the plane successfully, saving 150 lives.

When air traffic control directed the pilot to land his crippled plane at a nearby airport, the Captain told them “we’re unable to reach the runway and we’re gonna be in the Hudson”.   With his co-pilot, the seasoned pilot ran through the checklist to land the plane on the surface of the river.  He knew what to do from both his experience and his checklist.  He had the technique to ensure the correct combination of responses to the circumstances and conditions of his potential crisis.  He took control. 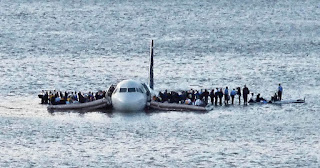 Every organisation, every business, needs to take control with the immediacy of a crisis plan that works. There is no time to pull out a threat severity matrix and debate what level crisis this could be.

Crises generally strike without warning. A rapid response may well save lives and assets and ensure minimal operational interruption.  It is the crisis checklist in the plan that makes the difference between logical, well thought-out actions and reflexive reaction.

The crisis checklist should be developed from an experienced and validated process. It should be documented and ready to use for these reasons:

·       To rapidly deliver an orderly and efficient transition from normal to emergency conditions.
·       To provide consistency in action and clear guidelines appropriate for complex and unpredictable occurrences.
·       To prevent actions inconsistent with corporate philosophy, reputation and governance.

Crisis threat checklists formally establish the threshold at which a critical event is triggered. They should determine clear responses – i.e. what to do and when to do it.  This allows for the calm deliberation of individuals and teams to perform effectively in a crisis.

Team Leaders and teams that know what to do, who is going to do it and in what sequence, will be so much more effective during a crisis. A single-minded sense of purpose and an absence of role conflicts, signal an organisation that will win its crisis response.

With social media changing the rules through the tyranny of distance and time, the keys to successful crisis management are speed, accuracy, thoroughness and credibility. Captain Sullenberger is a great crisis manager and a devotee of aviation safety. His book “Highest Duty:  My Search for What Really Matters” is worth reading.