The worst kind of event can wipe out a plant, destroy vital information and virtually stop production, but it should not finish the business.  The minute a crisis is declared, the recovery phase runs parallel.  Alternative means of operation have to be put into action, customers need to be advised, suppliers need to be contacted, and employees have to be supported and brought into the picture early.  Assets and earnings have to be secured and brand reputation and corporate image need to be stabilised. 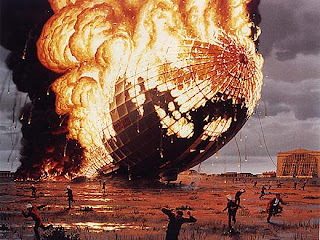 The transport industry places recovery and damage control high on their crisis management agenda.  Transport disasters have been the death knell of some transport companies.  Aside from Concorde and some specific aircraft, the only industry to actually die because of disasters is the airship industry.  In fact, there were only two disasters - the airship R101 and the Hindenberg.  And in real numbers, there was a combined death toll of less than 100.  Small numbers compared to the 1,403 lost on the Titanic.
In October 1930, the R101 left its mast in Bedfdordshire in the with 54 people aboard, loaded to the hilt.  The fittings on the airship included silver cutlery, potted palms and heavy Axminster carpeting.

There were large supplies of the finest gourmet food and wine with plans for a banquet over .  It was also carrying more diesel oil than was needed.

The of in gave confirmation that the airship was one kilometre north of .  Then came the report that the R101 had caught fire after not clearing a hill.  There were reports of a huge fire in the air and the sound of an explosion as the airship hit the ground and broke up.  The cause was never really clarified but it rapidly brought ’s airship industry to a close.

persisted with airships, particularly with the magnificent Hindenberg, the ultimate passenger experience.   Magnificently prepared cabins, plush dining room, a library and even a smoking area.   This airship made flights to the and passengers relied on this as a regular form of transportation.

On 3 May 1937, the Hindenberg flew into her American landing area from .  Families of passengers awaited at the Lakehurst Terminus.  The media were there.  A radio reporter, with his wire recorder, had decided that this was an interesting event to review.  He moved through the landing processes as the airship slowly lowered its bulk to the ground from the mooring mast.  Then, without any warning, there was a flash.  In the midst of this historic broadcast, the man, engulfed in emotion, screamed “it’s flashing, flashing, flashing terribly, it’s bursting into flames.”  This historical and frightening broadcast was one of the first on the spot broadcasts of an actual disaster in action.

The crew of the Hindenberg did an outstanding job of helping injured passengers and crew from the burning inferno.  Thirty-six people died from a total of 97.

This was the end of the airship industry.  The media gave the disaster world-wide headlines and the broadcast was aired on radio stations internationally.  Public outcry and fear was enormous.

The airship industry reviewed its options but recovery was not one of them. Safety and lack of capability signed the death warrant.  The Germans removed other airships from their fleet and both the and closed their factories and hangars.  It was all over.

Posted by Ross Campbell at 4:57 PM No comments: